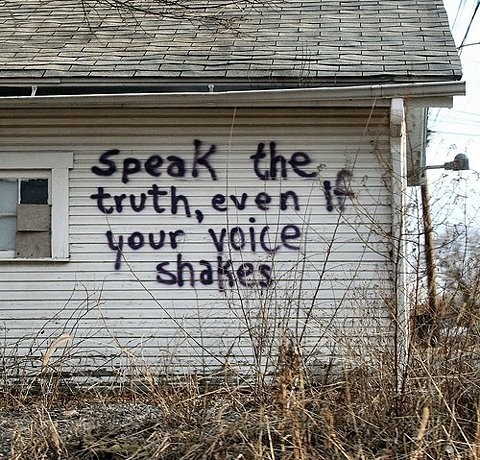 The truth doesn´t have to hurt. Although recently it felt a little that way. Following the start of a new project at the national theatre in Bergen, i found myself in an awkward position. Canceling classes at short notice in order to embark on the project, reshuffling an already complicated schedule, and most painfully of all, in some cases, walking away from sweet community wombs we had built together which felt, well, rather uncomfortable. Since this “reshuffle”, the rhythm of the week has

admittedly felt strange, but that tends to be how change rolls, but enough on that. What has been sweet though, is to really engage in a different challenge, deal with fear head on all the while cackling with terrified excitement. See, the project requires me to create a soundtrack for a performance. Those who know me know this is gullet chokingly up my ally, due to my alter ego past and occasional present life with records or mp3s. All good. Those who know me also know that i cringe dreadfully when “djing” in public, and seek to avoid “looking like a dj” for fear of, well, being a buffoon. Problem. As i will have to be on stage, doing just that. Gulp. Cue cold and hot sweats, and that´s not just from chatarangas. I agreed to the challenge and well, here i am today, still working my way through that inner critic that´s embarassed to be seen, tell anyone about what i am doing, and frankly, share myself and my truth honestly with the world. I am finding it testing but exciting. So here we are.

One thing is for sure. I might be teaching less, but my home practice has gone next level. As an advocate of self-love on the mat (yoga or whatever you want to call it), i encourage anyone to spend some time with themselves, just, you know, vibing! (will never use that word again.) Stuff cannot fail to come up. And so it has. Thus, my reservations online have been explored through a variety of postures, fascinatingly moving from mostly very introverted folds like janu sirsasana, evolving to more open extroverted wide legs n arms in vasistasana 2. So did the best thing i could do in this situation, combined my practice with long walks as often as possibly. Luckily, Bergen has been uncharacteristically sunny in the last couple of weeks, which has meant getting out and into nature and really being able to observe the beauty of spring in its full voluptuous glory. It was on one of these walks that i considered the parallels between myself and the stages of the seasons. Although the winter is seemingly challenging (pretty much my conclusion after two rounds here), what comes next really is beyond compare. I realised, that although the situation ahead is different and, well, difficult in some ways, it´s with good reason. It´s exciting and i feel massively passionate about the production. I am taking risks by making changes, but really, life isn´t about being sensible. Let us dance in the light of the moon, be a little bit crazy and open up to new challenges!

So as a result, this week´s classes have been all about shoulder openers, which (along with the neck) tend to be areas of where many of us hold tension junk. Postures to release this kind of build up are the focus, opening up the shoulders, delving into the shoulder blades and wringing out those areas, at the same time hopefully opening our hearts, in order to be open to things. Challenges, opportunities. It´s all the same, right?